South and west of the town of Killarney in Co. Kerry is an expanse of rugged mountainous country. This includes the McGillycuddy's Reeks, the highest mountain range in Ireland which rise to a height of over 1000 metres. At the foot of these mountains nestle the world famous lakes of Killarney. Here where the mountains sweep down to the lake shores, their lower slopes covered in woodlands, lies the 10,236 hectare (26,000 acres), Killarney National Park . The distinctive combination of mountains, lakes, woods and waterfalls under ever changing skies gives the area a special scenic beauty.

The nucleus of the National Park is the 4,300 hectare Bourn Vincent Memorial Park which was presented to the Irish State in 1932 by Senator Arthur Vincent and his parents-in-law, Mr and Mrs William Bowers Bourn in memory of Senator Vincent's late wife Maud.

The focal point of the National Park for visitors is Muckross House and Gardens. The house which is presented as a late 19 th century mansion featuring all the necessary furnishings and artefacts of the period is a major visitor attraction is jointly managed by the Park Authorities and the Trustees of Muckross House.

The former Kenmare Desmene close to Killarney Town is also part of the National Park and features Killarney House and Gardens and Knockreer House which is the education centre of the park.

Killarney National Park contains many features of national and international importance such as the native oakwoods and yew woods together with an abundance of evergreen trees and shrubs and a profusion of bryophytes and lichens which thrive in the mild Killarney climate. The native red deer are unique in Ireland with a presence in the country since the last Ice Age.

Killarney National Park was designated as a Biosphere Reserve in 1981 by the United Nations Educational, Scientific and Cultural Organisation (UNESCO), part of a world network of natural areas which have conservation, research, education and training as major objectives. 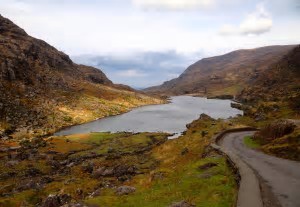 The Killarney National Park Education Centre is ideally located in The Knockreer Demesne. It is close to Killarney town and also within easy reach of a variety of habitats for a class to explore! Knockreer House provides the perfect location for primary level nature study with its safe environment, teaching laborataries and other facilities as well as the picturesque views of the lakes and mountains of the National Park.

The class will visit the National Park and will participate in a wide range of nature activities which are all linked to SESE. They can investigate habitats and wildlife at first hand, use mammal traps, microscopes and pooters do pond-dipping, scavenger hunts and experiments and, if they are lucky see some of the wild animals of Irelands premier National Park.

The aim of the day is to encourage the student to explore the natural world around them and to introduce basic ecological and environmental concepts. We will also look at predator-prey relationships, food-chains and how creatures adapt to living in their environment. The activities are designed to suit all age groups and workbooks can be provided.

All visits to Killarney National Park Education Centre must be booked in advance. If you would like to book please contact  064 6635960 or email knpeducationcentre@ahg.gov.ie