To celebrate National Biodiversity Week 2021 we ran a School Backyard BioBlitz from 20-28 May.

We asked participating schools to record all the plants and animals they could find in their school yard during a 2-hour blitz. Our Heritage in Schools Specialists were on hand to help out with planning and identifying species.

20 schools from 13 counties took part in our challenge - these were our teams: 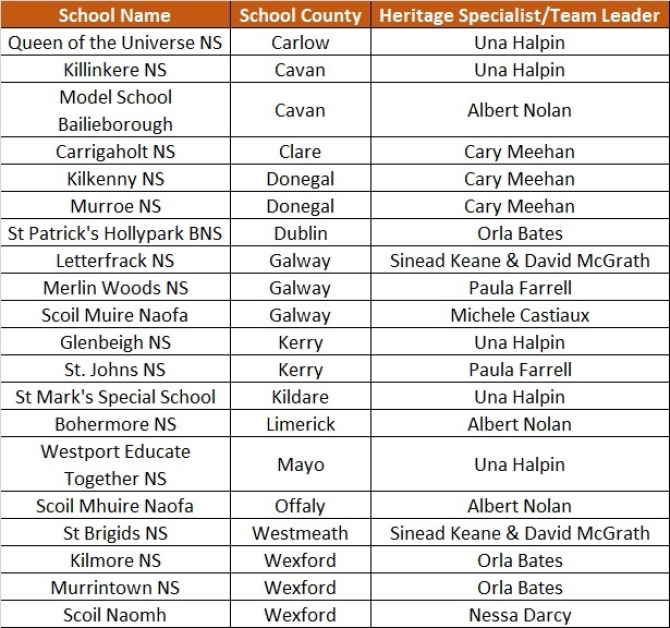 Between them our participating schools recorded 291 species of animals and plants.

Great recording from all our scientists!

Congratulations to Kilmore NS in Wexford and their Team Leader, Orla Bates, who recorded an amazing total of 77 species!!

Some of the less common species included the common frog from Killinkere NS and Hollypark BNS. Hollypark spotted some mammals too - three grey squirrels and a fox! St Johns NS in Kerry recorded the only rabbit.

We had one record of a dove and this was from St Brigid’s NS in Westmeath – this team also found 10 different types of grasses!

The most unusual record came from Letterfrack NS who recorded ‘A black hoppy thing’ – we’re sure this is a new species for Ireland. We don’t have a photo but if we can get a sketch of this creature we will share it.

Teams that got to species level with some of their identifications will submit those records to the National Biodiversity Data Centre.

Each school that took part will receive a pack of 5 identification swatches, produced by the National Biodiversity Data Centre, which we hope will help them continue their great work as Citizen Scientists!

Well done to all!